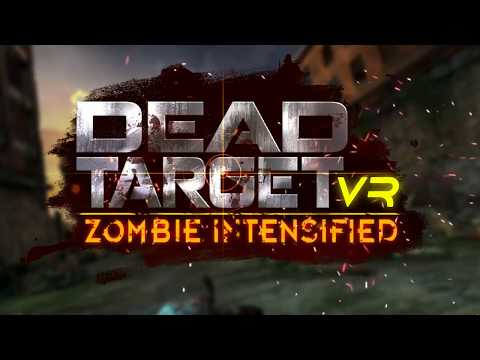 You can now play with or without VR glasses!

Keep your defense up and kill zombies in one of the best first-person shooters, DEAD TARGET VR. Can you figure out the key to survival?

One year after the operation Apocalypse of betrayer CS Corporation who had got the whole city infected with zombies in 2040, they now are facing their own doom. Their technology had made too powerful zombies to keep under control. An outbreak from their Bio Lab once again turned the whole island into a big nest of the living dead. CS Corporation flee away leaving their base as the only haven among hell.

You and agent M again will be the heroes who are going to save the day in Dead Target: Zombie Intensified. Your new mission is to purge this city and bring back peace for the surviving inhabitants. But beware! Zombies are now faster, much bigger and much more intensive! Think twice before you go in. Consider 10 times dangerous than last year.

DEAD TARGET VR: Zombie Intensified is an FPS game where you can:
- Kill zombies in with epic weapons
- Upgrade weapons and gear to face the upcoming zombie waves
- Experience 3D shooting as a zombie hunter
- Slay zombies of all types when you set your nerve to the highest level

APOCALYPSE – CAN YOU SURVIVE?
- Dead Target is a best FPS game where huge waves of zombies come to you as tsunami
- Kill zombies before the invasion comes toward you

WEAPONS & GADGETS
- Multiple weapons – Kill with a rifle, shotgun, machine gun, grenade launcher and more
- Unlock guns when you finish missions and improve your strength to become a true killer
- Discover combat moves using various guns
- Shoot zombies with the right boost to become a terminator on the battlefield